PlayStation has been the king of this generation when it comes to their single player exclusives. Just the other month we had God of War, and now we have the new game from Quantic Dream, Detroit: Become Human. The story of androids taking over the world and our advances in AI technology being our downfall has been told so many times. Now we see a different take on the story that we all know to some degree.

The story follows three protagonists: Kara, an android with a single father and his daughter, Markus who serves an old painter to take care of him in his old age, and Connor who helps the police with investigations and other police matters. Each scene of the game will follow one character then the next will switch to the next, and so on. Each character has their own story, but to no surprise, they all connect at some point. Kara tries taking care of Alice, the daughter, to protect her from the abusive father. Markus gets set on a path to lead a revolution to set the androids free from the humans. Connor investigates deviants, the androids who go rogue and go on the path of becoming sentient. That theme of androids wanting to be free and alive is heavily involved and explored with each character.

Just like other games from Quantic Dream such as Heavy Rain, the game is all about the choices a player makes. The game is an interactive story that has many branching paths. Unlike their other games, this has the most amount of scenarios that can play it. After a scene before leading to the next character, a flowchart that shows all of the branching paths appears. You see what you did and see blank spaces as to where you could have gone. Statistics come up to show what percent of people chose that action. That mechanic is impressive, especially when you think your choice was the majority. I had some moments like that but turned out I was in an 8% minority. You will receive points for the paths which can unlock videos, wallpaper, and other awards to unlock that don’t do a lot but are interesting for people who like those types of prizes. The pacing of the game starts off inconsistent. Some of the stories are exciting right away, but some can be mundane and boring. Markus, in particular, has a great story later on, but starting off things are slow.

The gameplay can be chosen at a simple level or to go for a more complex experience. The controls will become more elaborate if choosing the more complex difficulty. Just like other Quantic Dream games, the gameplay is centered around QTEs, motion controls, and interacting with the environment. The QTEs are forgivable for the most part since this style lends itself to having a lot of QTEs such as Telltale Games.  However, the controls might not be that responsive at times. Especially for the motion controls. I will always stand that motion controls are the worst idea to have in any game because it never works all that well. I wish the game gave an option to turn motion controls off because it makes for some difficult situations. Some icons to give instructions on how to perform an action are unclear. Using the trackpad on the PS4 controller in some unusual ways leads to some confusing moments. Those are only a few times in the game, but it is worth mentioning. Holding R2 allows you to view the area to see objectives and items to interact with. This is how you will engage with the world, if you are lost to see where to go, and will help gain new options for actions and dialog. Many games similar to Detroit have many items to interact with the world. Most of the time items are worthless and waste your time. Almost everything that can be interacted with has a purpose to the story. Everything you do for the most part moves you forward. The game features dialog choices that will determine how people feel about you and what actions you will take.

The graphics are stunningly beautiful. The game is full of detail that needs to be given attention. The detail lends itself to the narrative to build the story and characters. A significant portion of the story takes place in rainy weather which offers a particular look to most scenes. The sheen of the water and the lighting makes some pretty moments. We are in an age where we are getting beautiful games nonstop with their own art directions. 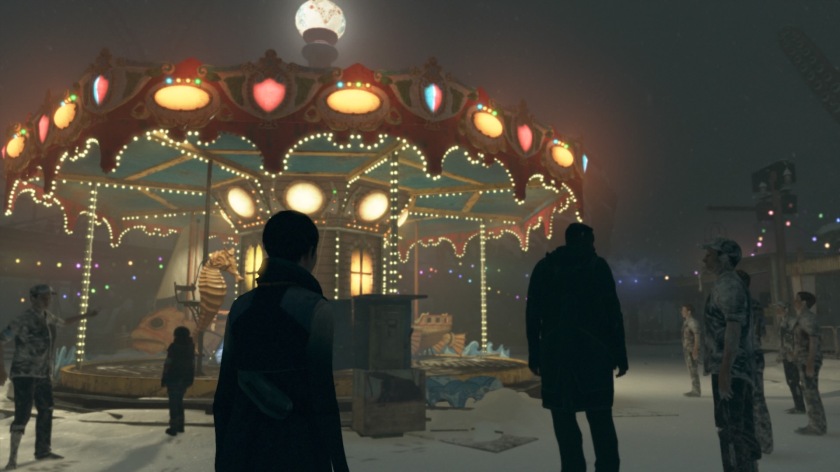 The issues with Detroit comes from all of the other games by Quantic Dream. Their games consistently have issues with controls and the story. Like I said, the motion controls and QTEs sometimes are not responsive that well. That can be damaging to a story that forces the player into a situation that is needed for quick reactions. Another critique is the story. The story and characters are all well written and acted. Especially the acting is quite superb. However, there are a few moments in the narrative that create gaps in the logic of the story. These are only a few moments, but it still hurts immersion and the overall narrative being told. I find it hard to take the game too seriously, even though the story is quite compelling and emotional for the most part. A game that is this story drive and interactive need those points to be almost perfect. The length is left to be desired with the time being around ten hours. The many branching paths can bring a player back for dozens of playthroughs, but the early game is hard to get through regarding the pacing. The issues are not too severe but are quite noticeable.

Detroit: Become Human is a good game for some people. If you have not liked games like Heavy Rain or any game from Telltale Games, then this is not for you. The story is quite short for only about ten hours, especially for a $60 game. The many playthroughs and options do give replayability, but it is something to keep in mind. The spin on androids rebelling against humans is quite well done. The narrative is enjoyable, and the different options that can happen are amazing. This is one of those games that you will really enjoy or absolutely hate. Detroit is one of the weaker PS4 exclusives in comparison to what we have seen already, but it is still a strong title. Quantic Dream has a particular style, and with Detroit, that style has been refined wonderfully. Seeing a company’s progress as developers is a great thing to see, so expect more games to turn out even better in the future.

Images via Quantic Dream and screenshotted on a regular PS4