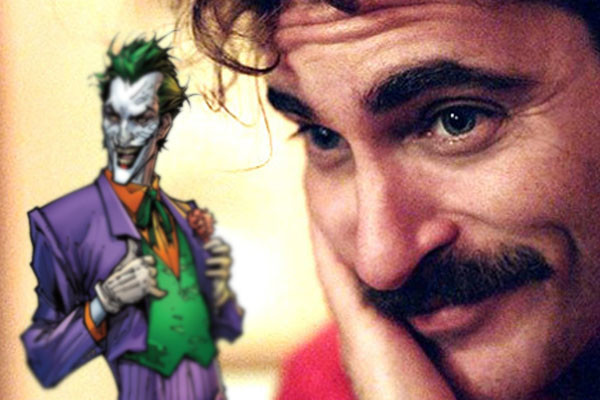 After constant talk about the potential Joker standalone film with Joaquin Phoenix as the infamous clown, we have confirmation that the film will happen. Variety initially reported that Joaquin was in talks to play as the Joker in an origin story movie. Now Variety has reported that Warner Bros. has finalized their deal with Joaquin and has greenlit the project.

The filming is coming together quite soon, sometime this September with a budget in the range of $55million. Todd Phillips from The Hangover trilogy is set to direct and write the screenplay of the upcoming supervillain flick. Scott Silver, best known for writing The Fighter and 8 Mile, will cowrite the film with Phillips. Along with Phillips and Silver, the legendary Martin Scorsese is set to be an executive producer on the film too.

While not much is known about the story, we will see the rise in the Joker’s power in the criminal underworld. Set in the 80’s, the rise of the gangster clown will be shown in a never before seen direction. Set apart from the DC extended universe, we will be getting a secondary universe. Jared Leto’s Joker will continue his story in the already established DCEU, while Joaquin Phoenix will be playing a Joker in a grittier universe. These new films are expected to be aiming for an R rating. The untitled Joker origin story will launch this new direction for DC.

Joaquin Phoenix is playing one of the most beloved villains from any comic book. The notorious villain has been played from a range of actors from Mark Hamill, Jack Nicholson, the late Heath Ledger, and lately Jared Leto has put on the clown make up. Playing this type of established and beloved character seems intimidating, and Joaquin has spoken about how he feels about playing Batman’s archnemesis. In an interview with Collider Joaquin talks about the project and character. When asked about how he got involved with the film, he says, “I take a lot of time and consideration when making decisions and what I’m gonna work on always. So, in some ways, the process, which is obviously reading a script and meeting a filmmaker and then continuing to have meetings and discussions with Todd [Phillips]. I think he’s very impressive and he seems to have a very interesting understanding of this world and what he’s trying to say. And so there is something very appealing about that and working with him on this particular project. It feels unique, it is its own world in some ways, and maybe, mostly, it scares the fucking shit out of me or something. It might as well be the thing that scares you the most.” He reflects on the initial idea of playing this type of character by saying, “Three or four years ago, I called my agent and said ‘Why don’t they want to take one of these characters and just make a lower budget film about it, a movie but a character study, and why not take one of the villains?’ And I thought, ‘You can’t do the Joker, because, you know, it’s just you can’t do that character, it’s just been done.’ So I was trying to think of other characters, and he said ‘I’ll set up a general meeting with Warner Bros.’ And I said ‘I’m not gonna go, I can’t go to a general meeting.’ So I completely forgot about it, and so then I heard about this idea, I was like, ‘Oh that’s so exciting, that’s the kind of experience I wanted to have, with a movie based on a comic character.” Joaquin has had the idea in the back of his mind for years, and everything is finally coming together afterall.

With Joker, there is always Batman. Every superhero has plenty of supervillains, but there is always their number one enemy that they can never completely defeat. A connection with the Dark Knight might occur in some form. The Batman connection is just a rumor, so this part of the story needs to be taken with a grain of salt. The rumor is that Phillips’ Joker origin story will tie in with Matt Reeves’ Batman standalone film. The possible connection involves Thomas Wayne, Bruce’s father. The claim that Thomas Wayne will be involved in some way comes from Jeff Sneider from Collider. In a recent video Jeff says, “One character I do know that one character who has a big role in this is Thomas Wayne.” With this not being confirmed, everyone should take it with a grain of salt, but Jeff has the experience in this field, so he might be right.

Another rumor going around is circling around Robert De Niro. The legendary actor might have a role in the film too. A lot of people suspected that this is the case due to Martin Scorsese being pinned to produce. With Martin out, who knows if this will stick. However, in the same video with Jeff Sneider, he also talks about Robert’s potential role. Sneider says, “As for De Niro’s role, I don’t think he’s playing some canon type character. I don’t think he’s playing like a local TV host or something like that, who’s maybe broadcasting about the Joker. I’m not entirely sure. I do know that one character who’s going to have a big role in this is Thomas Wayne.”

With the film getting ready to film in two months, we are sure to hear more news about the project shortly. With filming starting this late in the year, we can expect to see Joaquin’s Joker sometime late 2019.

That is just about everything we know so far about the upcoming Joker origin story. How do you feel about the recent updates about the film? Are you excited to see a gritty origin story on the infamous clown gangster? Comment below your thoughts on the film below.