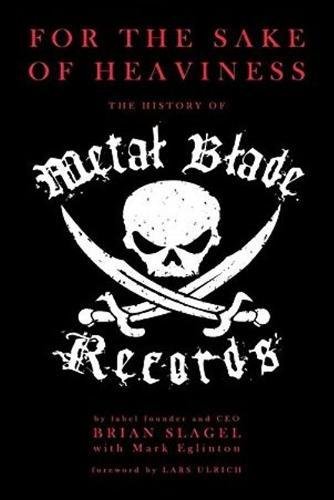 Being a dedicated fan of heavy metal means more than just listening to the music. Fans go from buying merchandise, making battle vests, decorating their rooms with posters, and getting tattoos dedicated to their favorite bands. On top of this, a die-hard fan of a band should want to get to know the artist or the industry. Many artists and industry leads who have developed this scene of music into what it is today have done a lot of work to get us to this point in heavy metal. Many have detailed their journey and passion in interviews, their music, and writing books. Yes, you will have to do some reading, but it will be worth it for the biggest headbangers. Here are five books that every metalhead needs to read.

Clicking the images of any of the books will take you to Amazon to purchase. You can click one link then shop away without having to keep going to separate links.

Ever wonder how death metal came to be? The answer is right here in this extensive read that gives you insight to teenagers with the love of heavy music would create extreme genres such as death metal and grindcore. The book is full of interviews with members of legendary acts such as Carcass, Napalm Death, Death, Cannibal Corpse, Obituary, and many more. You get an in-depth look inside of the minds who create such iconic extreme music along with the people on the business side who will end up signing these bands to spread their horrific music to the masses.

#4: Confessions Of A Heretic: The Sacred And The Profane: Behemoth And Beyond by Adam Nergal Darski

The Polish blackened-death metal band Behemoth is one of the most popular extreme bands out there in modern metal. Their vocalist, Adam Nergal Darski, came out with a book that is a series of interviews with him that gives fans an in-depth look into his complex mind. Readers will learn about his extreme religious views, his childhood, musical journey, battle with cancer, and much more. Even if someone is not a fan, this is a must read due to his compelling story and thought-provoking ideas. Seeing an essential figure in the heavy metal world survive against leukemia should be more than enough reasons for the biggest metalheads to dive into Nergal’s life.

Anyone who pays attention to what happens in the metal world will remember Randy Blythe of Lamb of God getting arrested in the Czech Republic. In his memoir, he details the entire process, how he survived a month in a foreign prison, and some other details in his life such as the loss of his child. This memoir is full of heart with Randy’s sense of humor shining, and his darkest emotions bleed onto the page. Just like an excellent movie, you will laugh, cry, and so much more. You will feel a swirl of emotions. Randy has a compelling story and is one excellent writer. For Lamb of God fans and people who never got into the band, this is one powerful story you cannot miss.

Corey Taylor is full of surprises from his talent to rap, scream, sing, play guitar, and even write incredibly funny and thought-provoking books. The man has written four exciting reads, but his first is not only his most controversial, but his most important. Though many will turn their noses up at Corey dismissing and bashing the seven deadly sins, the importance comes from his stories about his own life. If you never understood the emotions from either Stone Sour or Slipknot, then this will give you that needed insight. Corey delves into his personal demons that lends inspiration to those also struggling. Besides that, the man can set up arguments with precision and education. Whether you agree with him or not, he knows how to back up what he says. With a conversational style, all of his books are easy reads for the most part and will make you think and laugh with every page.

#1: For the Sake of Heaviness: The History of Metal Blade Records by Brian Slagel

Would it be too extreme to say Brian is the most critical person in the heavy metal world who isn’t an artist? Not at all, the man behind Metal Blade Records has signed some significant bands along with some influences you would never have guessed. His short autobiography details his journey of making compilation albums of local heavy metal bands in LA to being the CEO of one of the most prominent heavy metal record labels. You see the story behind classic headbangers such as Slayer and Metallica to more extreme artists like Amon Amarth, The Black Dahlia Murder, Whitechapel, and Cannibal Corpse. For those of you who want an insight to the business then this should be number one on your list.

2 thoughts on “Five Books Every Metalhead Needs to Read”