The 2013 reboot of Tomb Raider was a phenomenal surprise. I have played through the game twice and loved its story, characters, and gameplay. The sequel, Rise of the Tomb Raider was just as excellent with the absence of multiplayer. Now we get the final entry in Lara Croft’s origin story. How can a game with two superior predecessors fail? Well, that is quite the story to go into details in this review. Buckle up for this one.

Lara and her best friend Jonah are on a race to defeat the evil organization, Trinity. An ancient Mayan prophecy that says the world will end by several catastrophic events. She travels to a hidden city, Paititi to put the pieces of the puzzle together to save the world and stop Trinity.

The story has terrible pacing. A third entry in the series, especially a story about timing to save the world, goes at a snail’s pace. In many moments, you have some far logical leaps that will leave you confused why characters take specific actions or where the story is heading. The ending especially leaves plenty of room for some confusion. For the most part, you spend your time exploring forests, talking to locals in villages, or completing puzzles. Not much of an action-adventure game. When things do pick up, usually it is exciting. Lara must run through buildings that are falling apart or dodge helicopters shooting at her. The “fun” moments short-lived and rare to find at any point during the game’s fifteen or less hour campaign. The game is short and lacks any content in its storytelling that I am shocked that I paid $60.

Characters lack any development. Jonah remains to be the useless best friend. Lara still has the same motivations and has been saying the same things since the 2013 reboot about her parents or ambitions. Other supporting characters are introduced, but I felt there was no reason to care for anyone at all. The only interesting character was Amaru, the central antagonist within Trinity. At times he could be compelling. His Messiah complex made him a more complicated character. He felt he could do good for the city of Paititi, but his flaws made him go down the wrong road.

Gameplay is relatively consistent, but overall the same from previous games. Crafting weapon upgrades and outfits that give Lara benefits are a central mechanic. The costumes are useless because most of the game requires Lara in certain clothes for story missions that provide zero benefits.  Gather resources from exploring the map is a lot of fun and is rewarding. To help highlight rewards or interactable objects, there is instinct. A vision that highlights items, similar to games like Assassin’s Creed. During puzzles, this can be frustrating because Lara will repeat the same bad hints at you until you make progress. Hunting is still a mechanic, but not much development makes the activity bland. Lara can upgrade by three skill trees: blue for the seeker, red for the warrior, and green for the scavenger. Many of the types of upgrades blend together, so it makes it a bit weird the game divides into three separate trees. Many of the abilities are useful and make you feel like Lara gets significantly stronger.

Side activities such as tombs and side missions can be fun and often times some of the most rewarding aspects of the game. Side missions give you insight into new characters and the places that they live. The missions are far more interesting than the main story. The tombs are tricky but are worth completing their upgrades and treasure. 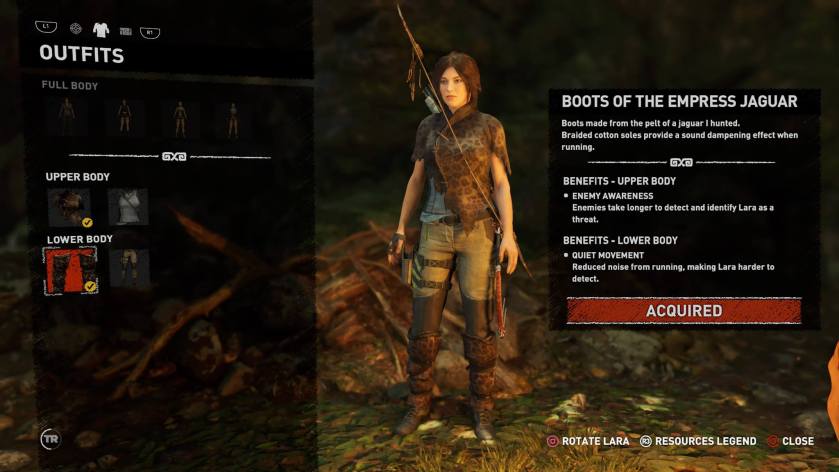 Merchants are introduced for Lara to buy new weapons and equipment from. While it is satisfying to go buy new gear, most of it goes unused throughout the game since most of everything you do is not combat related.

Maneuvering through the game can be frustrating since the controls are often not that responsive or the layout of the map does not work well. Climbing walls with my climbing ax gave me plenty of problems. Lara would be stuck on small parts that were not climbable, leaving me stuck in a place for a moment. I would continuously die because she would not do what I wanted such as grab ledges. An overall unforgiving experience.

Combat feels good but is lacking anywhere in the game. Stealth is the most advanced aspect that gets used a handful of times in short bursts. The heroine can hide in bushes, on top of trees, and cover herself in mud to hide against muddy walls. Gun mechanics are fun but hardly utilized. The bow and arrow supply endless joy and satisfaction using.

The game is full of beautiful environments from claustrophobic caves, lush forests, dilapidated ancient temples, and terrifying heights in the mountains. Each area is vast for exploration and great rewards waiting for a nearby tomb raider to find. The exploration and environments are the game’s most prominent redeeming qualities. For such a pretty game, you do get a photo mode with all of the basic functions: filters, frames, camera positions, and more. If this were a photography game, it would rival many of 2018’s biggest hits. The only issue comes from darker areas. You as the player cannot turn on a flashlight at will. Lara decides when something is too dark for her to turn on the light. I had to turn up the lighting to see through pitch black caves and crypts.

The graphics are for the most part quite stunning. The way the sun shines over trees and reflects off of water is impressive. The caveat is the animations, especially for characters, is often lacking. I felt that there were plenty of times characters lacked any emotion in their faces. Sometimes dialog was not even appropriately synced to their mouths. With plenty of times looking out at the landscape, it is easy to forget the weird facial animations.

One of the most unique mechanics is in the options menu. Yes, you know I am trying to give this game some positivity when I am talking about how I can change the difficulty or look. The first choice you make is whether you want higher resolution or framerate. I switched between the two to see for myself, and I will recommend you stick to a higher framerate because it feels rough without it. The game’s difficulty has multiple settings. You can choose easy, medium, or hard for exploration, combat, and puzzles. If you want environments to tell you where to go, but a difficult puzzle and combat system then you can make that happen. I wish more games would have this setting for a more customizable experience. A final setting is for characters to speak in their native language for more immersion. While the idea is excellent, it is not immersive. Lara only speaks English to people who live in a hidden city, but everyone can manage to understand one another while speaking different languages. Not just in Paititi, but in other villages, you explore this occurs.

Shadow of the Tomb Raider might be the biggest disappointment of the year. The game has some of the worst pacings I have experienced in years. For an action game, it lacks any combat at all. The few times you get to fight it is short and not sweet. The highs are as high as the mountains you climb. The lows are as low as Lara falling off one of those cliffs to her death. The verdict is that she is definitely deceased after this lackluster adventure that should not be worth $60. The easiest way to say how I feel about Croft’s latest adventure is that it is beyond boring. If you want to play as Lara Croft, killing bad guys and raiding tombs, then go play the other two games.

Want the game? Buy it here: