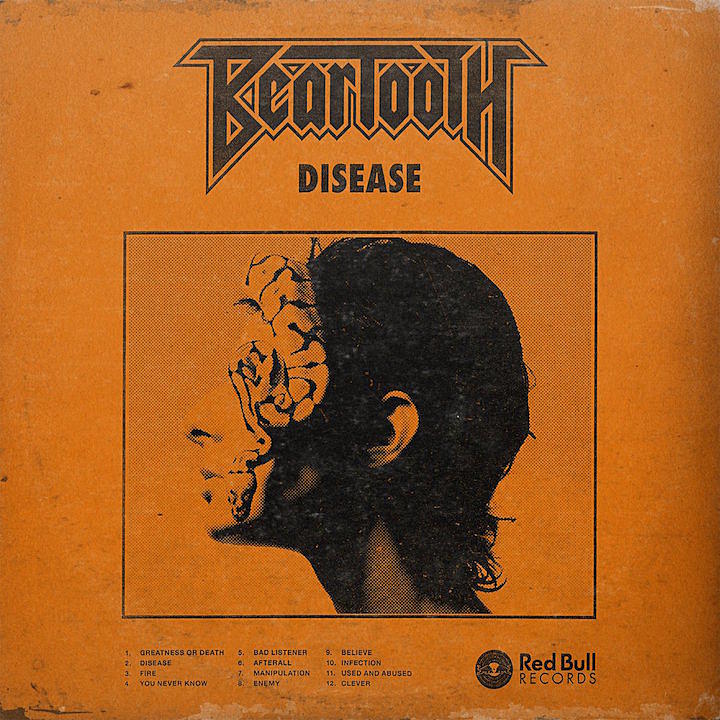 Beartooth has increased tremendously in popularity within the rock/metal world. The band mixes a hardcore/metalcore style along with some classic hard rock thrown into the mix. The new album Disease continues their statement with their sound and Caleb Shomo’s brutally honest lyrics as he goes further into his struggle with depression.

The album starts off quite strong and intriguing with an acoustic introduction in Greatness or Death. The song quickly explodes into a relentlessly heavy track. A strong start that lends itself into the rest of the hard-driving album.

The previous material has always taken a different focus on Shomo’s struggle with depression. Disease, Infection, Clever, Afterall, Believe, and Used and Abused are the staples in Beartooth’s themes. Tackling insecurities, self-destructive behavior, and mistreatment from other people. Shomo has unleashed some of his most honest lyrics that we have heard from the band. Disease‘s heartfelt chorus, “I still feed my insecurities when I know the cost,” always guts me every time. The band always ends on their most emotional track, this time we get Clever in which Shomo gives a more somber track compared to the rest of the album. The song has its driving riffs and trembling drums but manages to stand out more. The lyrics in the ending track are some of the most candid, “Another day I’m conscious is another day I bleed.”

The heavier side of the album features Enemy and Bad Listener. Enemy has its heavy bass and speedy riffs that make it perfect to headbang while listening. Bad Listener might be one of the heaviest songs Beartooth have ever delivered. An anthem for the heavy metal fans and a statement about Shomo’s career as he belts out, “There’s an anger or passion empowering me / I’ll be bangin’ my head ’til my brain rots.” While these are some of the heavier tracks, the album generally goes for a hard-driving rock style that mostly shies away from their metal sound.

Every song is fun to listen to, but some inconsistencies are here and there. You Never Know feels the most generic from other rock songs. Switching between the distorted verses to loud and proud choruses. The other songs are much stronger, but a lot of the instrumentation blends together. Some moments in songs like Fire and Greatness or Death sound straight out of one of the band’s previous albums.

Disease continues Caleb Shomo’s battle with depression with unapologetically honest lyrics. His voice carries out so well throughout the album. He makes his already great words shine even brighter. Most of the album feels the same sadly. A lot of songs sound similar to one another or sound compared to previous albums. While the record is fun to listen to and is a solid piece of music, a lot is missing to show some growth in the Columbus based metallers.

Buy the album below: