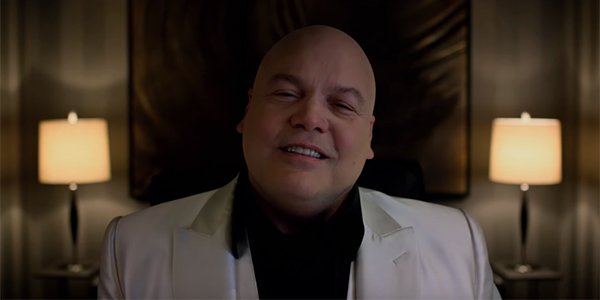 Sorry, Josh Brolin’s Thanos, Tom Hiddleston’s Loki, Michael B. Jordan’s Killmonger, and the best portrayals of The Joker ranging from Mark Hamill to Heath Ledger because Kingpin dominates this genre. Vincent D’Onofrio’s performance in Netflix’s Daredevil is the best the world has seen out of any superhero adaption to the big or small screen. The big bad guy of the gang world in Hell’s Kitchen manages to be the most complex baddie a superhero has had to face on TV or film.

Just a warning, there may be a few minor spoilers. If you do care then go watch Daredevil because the show is phenomenal.

One of the many reasons Tom Hiddleston, Heath Ledger, or any other memorable performance of a villain is due to several reasons, one of which being the subtle nuances they put into their character to make them come to life. D’Onofrio goes all out to not play as Wilson Fisk but to become him. Seriously, just look at comparison photos, the similarities are shocking. The actor gained 30 pounds going from 250 to 280. Taking into account that the character in the comics is 6-foot-7 and weighs 450-pound monster, that is quite a lot to take on after being a 6-foot-3 man. While he is not the exact weight or height, D’Onofrio towers over every other actor. Not only did he gain the weight, but he also shaved his head then once the wardrobe department gets him his suit, nothing can distinguish between the actor and the Marvel character.

He has the suit, especially the white suit in season three of Daredevil, the stature and mass along with being bald, but there is more to him. The writing in the Netflix original is fantastic, especially in creating his character. The best antagonists are often the sympathetic ones who blur the definition of being a bad guy. A chubby kid with an abusive father becoming an all-powerful crime lord. His journey is painful, yet inspirational. A flip on the rags to riches story for someone who murders his father and commits plenty of other horrific acts of violence.

While his origin makes for a complex man, his heart is what can trick anyone to root for him over our blind hero. He is ruthless with a mix of being an overly emotional child who throws temper tantrums. He has a love interest and shows genuine affection for her. Some stories show the monster with a disingenuous heart, but Fisk is in the head over heels type of love for Vanessa (Ayelet Zurer). The amount of emotion always comes out in his voice. D’Onofrio has stated that his voice for Fisk is intentional by putting all of that anger, sadness, and all of the other feelings come through by the way he speaks, no matter the subject manner.

Motivations for any character are arguably the most crucial aspect to their personality. Batman’s parents died which leads him to a life of fighting crime, Killmonger wants to fight against injustice against his people, Thanos witnesses his people going extinct, and Fisk wants to make Hell’s Kitchen great again. A man who has empowering speeches about rebuilding the city to create a safer neighborhood for the community. What generally goes wrong is these people have extreme methods. Having mass genocide is a bad idea, Thanos. If you want to improve your part of the city, then avoid criminal organizations, bombing buildings, corrupt police officers, and bashing a man’s head in with a car door until nothing is left except for some splattered brains.

The man does not need to say a word to outperform most of the already stellar cast in the Netflix original. The subtle expressions with his hands, eyes, and overall demeanor give the character an extra layer. Similar to Heath Ledger’s licking the inside of his mouth and Tom Hardy’s memorable accent as Bane, D’Onofrio mixes the loud way to tackle a performance and the quieter approach. The way he stares at the white painting is always impactful and haunting.

While a villain such as Loki gets multiple movies, the amount of screentime for Fisk is much greater, allowing for further development. The state of entertainment today gives room for a show to shine brighter than the blockbusters. While Daredevil has the advantage with more time, not every show does. Luke Cage stumbles with its villains, and Iron Fist delivers too similar to stories that feel repetitive in the storytelling. One of the biggest differences between great and bad TV is often time management. While season two of Daredevil was a bit messy, season one and three manage to utilize every minute with care. Allowing for Wilson Fisk and every other character to be developed into the endearing personalities that lift the show up.

D’Onofrio captures the complexities to one of Marvel’s most iconic villains. He has always had this multilayer personality that can switch in a few sentences. One minute is a raging bull then the next he is a crying baby. While many characters that are too emotional can come off as annoying, D’Onofrio strikes the balance to make for a captivating performance that rivals anything done in the superhero genre. Taking the old tropes that are seen in his character, but taking the initiative to take the extra step to bring the character to life.

While many excellent portrayals of iconic villains have been seen from Jack Nicholson’s Joker to modern-day performances by Michael B. Jordan in Black Panther, fans of the superhero genre have plenty to be happy about. While Vincent D’Onofrio’s process is similar to many of these talented actors, what holds him above is his consistent acting and the fantastic writing that brings one of the most iconic, complicated, and brutal Marvel characters to life.

All three seasons of Daredevil are available on Netflix right now.

One thought on “Opinion: Vincent D’Onofrio’s Wilson Fisk is the Best Supervillain Portrayal Put on Screen”