To no surprise, the online-only game with the game as a service model has a disastrous launch. While I knew Fallout 76 would be rough with glitches and needing additional content, I did not realize how boring and lonely this open-world title would feel.

Set in the earliest time period in the Fallout series, you wake up in Vault 76 to see an empty vault where the overseer has left. You follow her pointless guidance into the dangerous outside world of West Virginia.

Once launching the game, it is time to create a vault dweller. The character customization is precisely the same from Fallout 4. Despite its lack of innovation on the mechanic, there are plenty of options to make an interesting looking person, for better or for worse.

The main difference that sets this game apart is the online portion. A server holds up to 24 players. The experience feels lonely since there are no interactable NPCs except for vendors, some quest giving robots, and enemies to kill. My experience was spent seeing other players run past me as they go on their adventure.

PVP happened only a few times but was fun every time. The game’s balancing system works quite well. If someone is higher than you, you can still kill them. The combat is dependent on skill, teamwork (if you are playing with anyone), and what weapons you are using. The other balancing mechanic is that if someone attacks you, little damage is done. If you fight back, then the full damage is enabled. Killing a nonconsenting player will mark you as “wanted” which notifies everyone in the server about the player with a price on their head. The only consequence of dying, by player or NPC, is losing your junk. You can pick it up, but any other player can pick it up for themselves. The scraps will be used to craft, customize, and repair items and camps. Out of the many dull mechanics, PVP almost makes 76 worth playing. 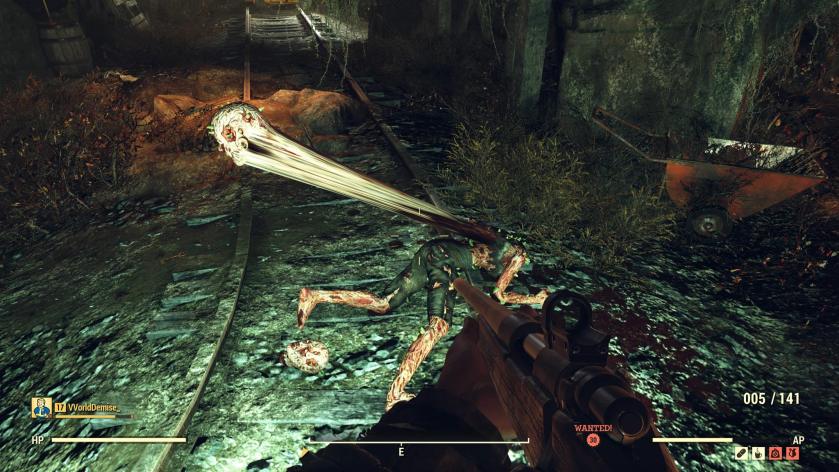 Playing with friends makes the game complete. I would play with friends and have a blast, despite crashing, glitches, and other technical issues. However, similar to Elder Scrolls Online, playing with friends does not carry much weight. Combat becomes easier with a party, but I never felt I was in a team. The teaming up system is only meant to see your friends from far away and to fast travel for free to their locations. If a friend completes an objective in a quest, then you will not get credit unless you do your part separately. Completing quests feels like playing a single player game and looking to your buddy’s screen to see where they are in their progress.

Playing alone is a grueling and punishing experience. The game’s difficulty does not allow people to be alone. Since I cannot socialize with NPCs, the lonely feelings mix with boredom to make for an atrocious time in the wasteland.

Survival in the wasteland of West Virginia consistently feels tedious, brutal, and rarely fun. Players must eat and drink to survive. The meter for hunger or thirst running too low will drop AP (action points, the bar for VATS and stamina) and diminish health. Foods and drinks have a variety of stats such as how much the hunger/thirst will increase or how much radiation is in the product. Getting a disease is another factor, creatures or food/drinks can give the player a disease. Diseases and radiation poisoning have a variety of positive and negative attributes. The lottery of the conditions on the health of the character can have some creative and fun effects.

Base building returns with features for a more user-friendly system. Now a lot of the map allows for base building instead of designated areas. Once anything is built, making a blueprint for convenience in case any equipment gets destroyed or if the owner gets the urge to move to a new location. While the system will not be for everyone (we all remember the polarizing feelings fans had during Fallout 4, right?) but for the constructive survivors of the nuclear holocaust, this is perfect for you.

Crafting for weapons, food, armor, and other items are tasking, but not overly burdensome. Scrap items to get materials to repair, upgrade, and build what you want. Going around the world to scavenge is the most fun I had, especially when grouped up with friends. Learning what to craft comes from scrapping gear or finding plans or recipes. The main problem is someone else crafting on a workbench; one player can work at a time. If someone works for a long time, you might have to wait quite a while. I understand due to the animation of crafting takes up space so only one person can create their items, but the efficiency is atrocious for a multiplayer title.

Stashing your gear and junk is easy. Stash boxes can be found or crafted at the camp to store anything. If you deposit a gun in your stash at a gas station then go to your base, the weapon will be in the container. The universal system transfers your gear where ever you are located. As of writing, the limit of weight the trunk holds makes for a frustrating experience. With how much junk, armor, and weapons you will need to store, the system breaks entirely by how little you can stock up.

Combat remains satisfying, but the new system for VATS (Vault-Tec Assisted Targeting System) feels inconsistent. Now the targeting system does not stop or slow down time; it goes in real time. Trying to shoot in VATS feels weird at first, but you might get used to it. The hardest aspect is your weapon does not track the target. If the ghoul you are shooting at moves in a particular direction, and you mistime pulling the trigger, you will miss your shot. Also, you can only target body parts with a perk. Without the right perk, you will shoot at the enemy as a whole. While I like the system in some ways, with some necessary tweaking then combat with the aiming system will feel more user-friendly.

Quest distribution comes from either holotapes, robots, and discovering locations or items. A feeling of constant apathy comes from the lack of interesting stories or characters to drive the narrative. With the population full of actual players and the only storytelling comes from notes or recordings, I feel a lot less invested in what is happening.

Caps have a new purpose in the world. While they are still used to trade with vendors, both players, and robots, the currency is used to fast travel. You can travel to any location you have discovered for a fee. The fee differs depending on how far away you are. Getting to your camp, friends, or Vault 76 is free. Since I did not barter much, the travel system worked quite well.

The massive world has plenty of interesting places to explore, but not much to do. Outside of crafting, killing, scavenging, and quests, there are not many activities available. Events are always happening around the map for bonus rewards, but mark they are generic waves of enemies or mundane missions like escorting a robot to one location. The most fun comes out of walking around to look for new items and to kill things, not much game of the year material right here.

Leveling up for the S.P.E.C.I.A.L. system is a brilliant innovation to keep a core mechanic fresh. When you level up, you can distribute one point to any of the following attributes: strength, perception, endurance, charisma, intelligence, agility, and luck. Once you put your mark in, a series of cards appear. Each card has a unique ability with several tiers that can be leveled up to improve the perk. Every five levels give a card pack to build up your collection. At any point cards can be swapped out for a difference perk, allowing for free customization for any situation. Smart players can utilize this to adapt to different challenges for combat, exploration, and more.

I have never seen a game so inconsistent with graphics. At times 76 looks beautiful, and most of the time quite ugly. The world is full of poorly rendered textures, pop-ins, and some of the worst dynamic weather in recent years. The weather lacks any variety. When rain happens, nothing looks wet and enhances how unattractive everything seems.

Photo mode as a feature in any game is usually awesome due to how beautiful graphics have become. In the appalling Fallout 76, not so much. Talented photographers can bring out the beauty, but many players, like myself, might struggle to take a nice picture. Due to the constant threat of players or enemy NPCs, then you may feel discouraged to stop to take a selfie in case of getting mauled by a deathclaw. 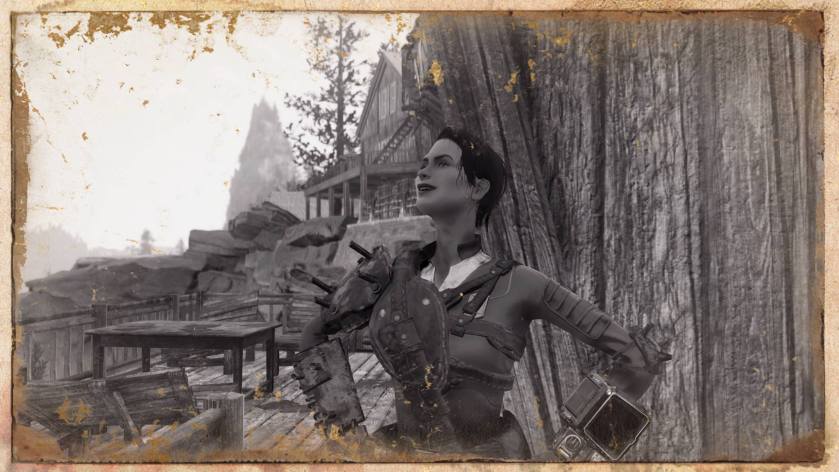 The dreaded microtransaction that plague the industry have made their way into Fallout. Before anyone brings out torches and pitchforks, the way Bethesda handles the despised monetization system works quite well. Everything bought is cosmetic for power armors, Pip-Boys, and more. Avoiding spending your hard earned money is easy. Gaining automatic points by completing challenges like killing X amount of enemies or collecting items makes for an easy way to earn cosmetics without paying real money.

The amount of small and big issues that fester inside of Bethesda’s online survival adventure bring down what could be a great title. With updates, 76 could be fantastic. However, due to moronic AI, crashes, and other bugs, the experience is tainted as of now. Long loading screens are a staple in Bethesda games which add insult to injury once the game crashes and you must sit through the process of the never-ending screens. Somehow they messed up so bad that there is no border option. Therefore a part of my screen has been cut off during my entire time so far. Silly mistakes from a AAA title like these are not acceptable. Along with how dull it is to play makes for one of the year’s biggest disappointments. Keep an eye out for the future because this trainwreck could reach greatness, but buying right now would be foolish.

All images and videos captured on a PS4 Pro

Want the game? Buy it below: