As I said in my review for Red Dead Redemption 2, I will review Red Dead Online separately and put on a grand total score for the game in its entirety.

The online worried me. While I love the singleplayer of Rockstar’s games, sometimes their multiplayer falls flat in areas, especially with GTA V. While issues remain present that GTA has along with new problems, Red Dead Online sweeps most of its flaws under the rug by how much fun the experience in this open-world Western.

Right off the bat, you get to create your character. The system is what you find in most games, modify features based on set models to make the person you want to look like. However, every character looks like a hideous monster, especially the females, sadly. If you play as a man, have a big beard then you should be fine. While it is better than Rockstar’s last giant online adventure with GTA, a lot of tweaks remain needed.

Similar to a Fallout game, you get to assign attributes to aspects of your character. While not as in-depth as the S.P.E.C.I.A.L. mechanic, points distributed to health, stamina, and dead eye make a difference early on. Such a small part of customization, but a nice addition before getting started.

A story does take place before the events with Arthur Morgan and his dysfunctional family. The silent protagonist gets broken out of prison and gets hired by a mysterious woman. She needs a few people to avenge the death of her husband. Just like a Rockstar narrative tends to unfold, the adventure loads itself with wildly eccentric characters and plenty of violence. Unfortunately, due to the game being in beta, a conclusion remains absent until further updates.

Red Dead has a focus on moral choices for both online and offline. Main missions involve a dishonorable or honorable offer. Stranger missions have the same result. Just like with Arthur’s difficult decisions, choosing a lighter or darker path will change how people perceive you, alter bartering, and give new missions that will unlock only for players following a particular moral compass. While more needs to be done, the honorable system works wonderfully in the new multiplayer mode.

Survival mechanics transfer over; therefore you must eat and drink to recover health, wear appropriate clothing, and deal with the constant threat of other people or wildlife. Many of these aspects feel toned down, but if you mastered how to live in the Wild West as Arthur Morgan, then you should do well in this new environment.

Camps feel less attractive as of now. Currently, you can move anywhere to fit your needs with ease, but for practicality, having a base feels pointless. Ordering items from the pamphlet, which you can buy supplies from anywhere and have no need for a store, go to a post office or your tent. While that is efficient to gather items or cook, nothing else has a purpose. Upgrading is only for looks and will burn all of your cash.

Horses dying has less impact, thankfully. To make sure players are not driven to insanity by your trusty steed getting killed, the horse eventually comes back. Much of the mechanics from singleplayer transform into a less tedious system that allows for a more fun experience, while keeping the weight of survival.

Leveling up has light RPG elements. With enough experience, the right level, and enough money will grant a perk. Perks can be used for damage, dead eye, and much more. Ranking up has a new meaning which makes for a more meaningful experience. 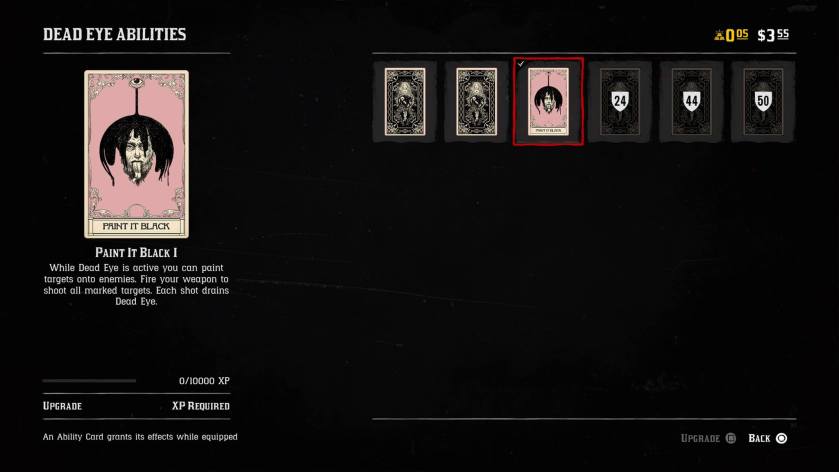 The meat of any online game will always be playing with friends. Form a posse to see each other and easily play various activities together. While a few kinks need fixing, playing in a gang makes up for many issues along the way.

Events randomly come up in the free roam. Earn money and experience points from winning the activity. A range for all player can be found from taking a horse to one location or getting the most kills with a revolver. For competitive players, this is a load of fun to pump up your adrenaline.

Big and small matches are available to play in the competitive modes of online. Capturing bases, killing with certain weapons for points, classic deathmatches, and races provide a wide variety of competition. While each mode will find its way for any type of gamer, the matchmaking makes zero sense. Each game type has a playlist that generates random games to play. If you love playing “wanted,” then you will have to pray that it pops up and wait through being forced to play through something that might not be your cup of tea.

No private servers are available. Which makes it difficult to play with friends without the interruption of other players. While many aspects are user-friendly, many are not.

Money has two forms. Earning regular cash through missions and activities then gold. Microtransactions like GTA Online have taken the form of gold in Red Dead. Gold can buy certain items if you do not have enough of your funds. Days ago an update occurred to lower prices and give greater payouts. Hopefully, Rockstar stays on top of a fair economy and does not turn have another GTA.

Red Dead shines above Rockstar’s last grand title with its improved economy and satisfying activities from hunting to competition. Playing with friends has never been more entertaining. However, glitches occur often. Problems with animations, invisible players, and getting booted off servers constantly interrupt an otherwise great multiplayer. With polish and future content, greatness will arrive.

Thankfully for patches and the excellent singleplayer, Red Dead Online does not hinder the product as a whole.