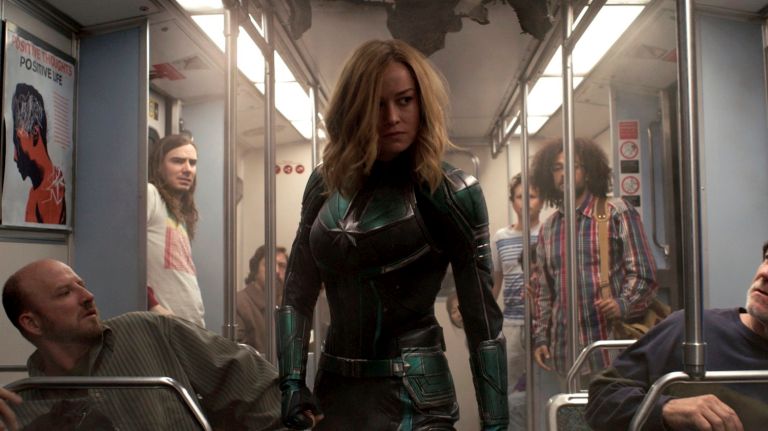 The most powerful hero has arrived in Marvel’s giant cosmos of superpowered characters. Captain Marvel (Brie Larson) glows, blasts, and soars as one of the most loveable and endearing personality to come through the already strong roster. While her debut is strong, some flaws make the film taken down a tier compared to its predecessors, but manages to have everything that makes a Marvel movie irresistible.

Hala, the home planet to the Kree, an advanced population that is in the middle of a war against the Skrulls, an alien species that has the power to transform into anyone. After a botched mission, our hero finds herself on Earth in which she meets a S.H.I.E.L.D. agent named Nick Fury (Samuel L. Jackson). She convinces him to get on her side to put a stop to the Skrulls, meanwhile discovery a lot about her past. An origin story that manages to improve upon the formula of Marvel’s past debut narratives while still holding onto the weak villain issue that so many have discussed over these past 11 years.

Larson and Jackson not only are excellent on their own, but their chemistry is equally wonderful. Due to the two stars working together in the past in films like Kong: Skull Island, it is not surprising that they have developed a relationship that can translate onto the big screen to make for a more believable and enjoyable experience.

Plenty of new characters were introduced along with a couple of old ones fans will recognize. Everyone stood fairly strong except for the underdeveloped Yon-Rogg (Jude Law) who had a strong performance with not a lot to work on. The other main new introduction was Talos (Ben Mendelsohn), a high ranking leader for the Skrull, who had a far stronger presence than Law.

Out of every standalone flick that has been unleashed in the MCU, Captain Marvel has the most expansive world-building we have seen so far. While more significant films like the three Avengers bring more the evergrowing universe, this narrower story ties together important arcs and small details. Plenty of moments put a giant smile across my face seeing characters from the past and other references from past movies being further developed from a time that was not previously explored.

Blending drama, action, and humor did not work as well compared to previous entries. Most of the action was entertaining, but underwhelming until the final act, which was spectacular. Jackson took all of the laughs with a few lighthearted moments with Larson, but nothing that had a big “laugh out loud” moment that stood out. The serious beats landed perfectly and melded well with all of the alien gunfights and playful banter.

The visual aesthetic along with the music brought the 90’s to life creating a more unique feel throughout the film, even the subtle details like the clothing and cars driving around the city. The crew managed to make this prequel not feel like a gimmick, but more of an individual amongst the many movies in the franchise.

Going back in time when Nick Fury had two eyes, hair, and that youthful energy is easy for the talented Samuel L. Jackson, but making him look young can be a big miss since so many movies tend to make the actor look odd rather than like their younger self. The de-aging technology worked flawlessly bringing Jackson to his exact look back in the day.

The sci-fi elements had their glowing effects with some breathtaking moments with space battles and Hala. Sadly, not much was explored on Hala, but what little was seen impressed me further on how Marvel can develop unique appearances for planets to make them feel special and alive. While some of the suits in the MCU may not be the most appealing, our photon blasting protagonist’s suit rivals the best costumes of her soon to be crime-fighting pals in the Avengers. The special effects mostly work, but Marvel continues to show some inconsistencies here and there in some scenes.

Steps forward were taken that takes Captain Marvel to new heights, but Marvel also proves they are much better when making bigger stories that an origin film cannot accomplish. An uncompelling villain along with some rough pacing in the first act leads this new adventure into the mid-tier section of the MCU rather than being next to the likes of the much better standalone films we have seen from Spider-Man and Captain America. Now that she has been included in the universe, the future looks much better for Larson as her character gets further development with future films.