Jordan Peele’s descent into horror was a smash hit with Get Out, a thought-provoking thrill ride and now he has another mind-bending flick that is more haunting, equally thoughtful, and more significant flaws in its direction and storytelling. Us may not reach the same heights as Peele’s first entry into the genre but makes an impact with its unique idea.

Family vacation went horribly wrong, familiar with a brilliant twist. The Wilsons go to Santa Cruz for a getaway, but coincidences occur to bring back some past memories for the mother of the family, Adelaide (Lupita Nyong’o). After one night of seeing a family in their driveway, it is revealed her suspicions are correct. This American clan has doppelgangers called The Tethered, who have a bloodlust and now the Wilsons must survive and discover the horrific truth behind their evil other halves.

While Us is a far more adrenaline pumping film than Get Out with its faster pace and more focus on murder throughout, the first 20 plus minutes takes its time to develop the Wilsons. Their typical American family dynamic may feel stereotypical, but is executed flawlessly with Gabe (Winston Duke) as the goofy dad, the protective mother, Zora (Shahadi Wright Joseph) as the teenage daughter who isolates herself to be on her phone, and Jason (Evan Alex) as the innocent, precious little boy. Their chemistry feels real, and everyone stands out with their unique personality. If this were just a family movie, I would not mind. 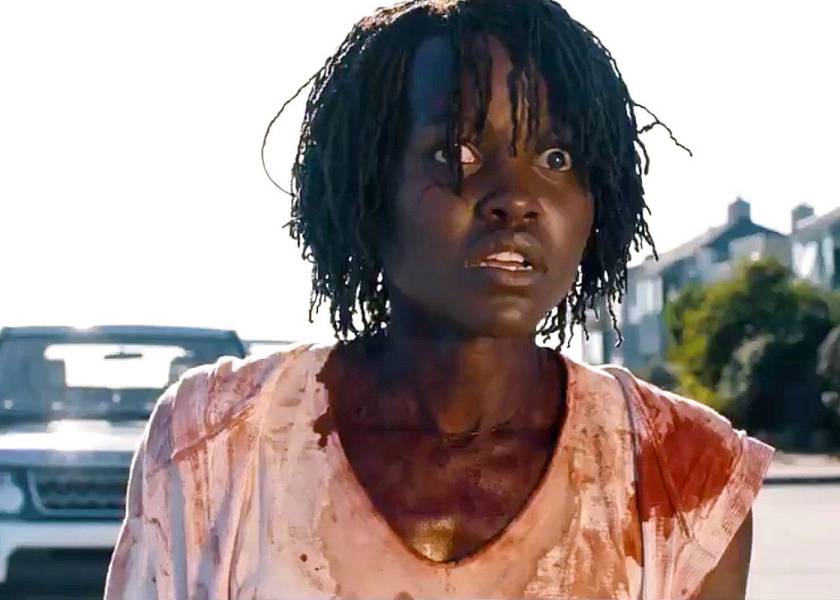 The cast knocks it out with their performances, especially when having to turn humorous family banter into the chemistry that depends on survival. Nyong’o steals every scene with her moving performance of a woman who suffered something traumatic in her past. While she is fantastic, the children and Duke keep up the pace with her by delivering contrasting emotions that work well together as a unit.

The turn of tone from a family vacation that is full of fun and laughter turning into a bloodbath works, especially for the Wilsons. They adapt in a relatively believable way, at least when events happen to them. Some reactions feel less real when they witness things happen to others, but it only occurs a few times that threw me off of their emotions.

Writing an original idea may seem impossible, but Peele crafting the Tethered and their backstory is as genius as his themes that make this more than just your standard movie. I had to try to catch up with the film as its narrative moves on while trying to pick up on messages and tiny details. My brain might be exhausted, but it is happy to have had the exercise.

Similar to Get Out, the melding of various emotions from humorous beats and heart pumping intensity comes together, but differently. I felt Peele’s previous film blended together smoothly, while here there are considerable shifts with each act turning into a different feel. What works well is the transition allows for a way to say, “Hey, this is the next evolution of these characters and their journey.” Having everything come together as unison would make for an effortless development rather than sharp turns that jerked me into a new tone.

Peele proves himself yet again as a master of detail with plenty of foreshadowing, world building designs, and thoughtful additions that make it worth a second or third watch to catch everything on the big screen. The cinematography and lighting are well thought out with no careless mistakes. The passion of filmmaking gushes out, making it apparent that Peele got to tell the story he wanted to deliver.

Three months in and I think I found the best score of the year. Eerie orchestral work along with epic, yet haunting choirs elevates both the themes and emotions. The grand feeling from the music also gives me a sense for Peele’s progression in the horror genre as a director, producer, and writer.

Horror lives on with another success that despite its flaws, gives a spine-tingling experience. Unlike its predecessor, Us has its predictable moments along with less impactful twists that at times felt thrown in. A powerful message gets delivered about society and race, but less creative than Get Out‘s rare take on racism. While it may fall short in some areas, fans of the genre should be as satisfied as I am with this brutal vacation.