The unlikely sequel to Rage got my interest due to its surprising announcement and the collaboration between id Software and developers of Just Cause, Avalanche Studios. Having Avalanche’s experience in open world chaos and the minds over at id software which created the first person shooter genre, it sounded like the perfect combination of developers. Instead, Rage 2 delivers on the gunplay and not much else.

Set 30 years later, the world has slightly rebuilt itself, but still struggles against various bandit factions and the powerful Authority who want their power back. Walker, the last ranger, joins the remaining resistance to defeat the Authority and their leader General Cross. A typical story of fighting back an evil powerhouse with some interesting characters, and not much substance. While the narrative leaves plenty to be desired, the amount of context was given to help people like myself who never played the original title is impressively well done.

The first thing you do when starting up the game is to select a male or female Walker, which is utterly pointless in a game with no dialog choices, no customization, and no third person option.

The characters have some interesting characteristics, but due to dull writing and passable voice acting, I could not find anything in my heart to care for these people. When there should be humor or dramatic beats, I felt nothing seeing this adventure play out between the heroes and villains.

While the open world offers a variety of environments with a generous amount of space, not much substance can be found. Bandit camps, races, bounties, and other activities are available everywhere, but everything feels so bland and lifeless. Yes, this a post-apocalyptic universe, some liveliness to the side missions to allow for more motivation to complete them. The one benefit to exploring the wasteland is to find gear, materials, and money to upgrade Walker. 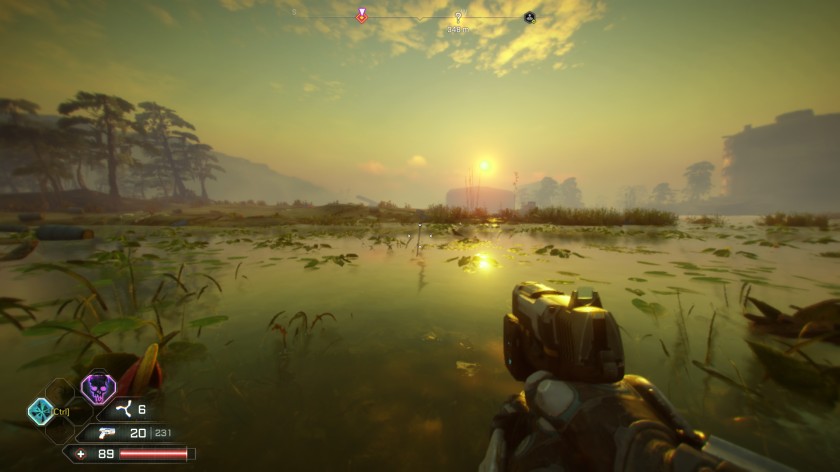 Gunplay remains excellent, which is no surprise. After my run through, I only unlocked a handful of guns because most weapons can be opened by exploring to find ARKS that will give new abilities or weapons. The alternate fires and different feels to each new piece to my arsenal felt perfect as I gunned down every enemy in my path.

Abilities have a wide variety that makes a significant impact on the gameplay. Powers like overdrive which enhance your damage and healing capabilities or shatter which kinetically blasts foes not only assist greatly in combat but makes the game that much more fun.

Upgrading weapons, vehicles, and abilities can be done with feltrite, a crystal that can heal and be used as a form of currency to unlock ways to make Walker more powerful. Other attributes must be unlocked by completing objectives for key allies, who each have their own skill trees. Every time I unlocked anything, it felt meaningful by how much it can alter gameplay to enhance my enjoyment and survival out in the wasteland.

Getting around can be done by fast traveling to major cities or driving. The driving is horrendously clunky and can be worse depending on the vehicle. Too many of the cars feel either too light or heavy. On top of the transportation that gets stale quickly, the camera often times freaks out and makes everything that much more awkward while trying to traverse this massive landscape.

Moving on foot feels much more fluid and comfortable. Think of DOOM in its speed and mobility. If the map were not so big, then I would have a lot more fun running to each point.

Using a GPS to track a location or objective is the most basic mechanic in vast open worlds, yet most of the time the purple line did not follow until I had to turn it off and on to start moving towards my destination.

The gameplay is quite accessible with tutorials that come up briefly to show the ropes on how to use specific guns or abilities. While this is useful and does not get in the way of the overall flow, other tips that pop up to deliver information on new found activities feel excessive at times while disrupting the game.

Enemies have little variety, but the few types do require altering strategies slightly, making them more attractive than generic bandits. When a lot of opponents come up in larger battles, then the combat gets much more engaging. The best comes during the boss fights, which feel inconsistent in their difficulty, but I had plenty of enjoyment with these challenging foes. Setting the game to hard hits perfectly between challenging and fair.

The AI is also inconsistent with their behavior. Sometimes I saw smart strategies play out, other times they would charge until someone died, while the last percentage of the population would stand there, allowing me to shoot them in the head.

Interacting with NPCs to trade or for missions can get tedious. Traders and Walker have the same exchange every time the two come in contact. Other times I have found trying to talk to a supporting character to advance the story, and they will not respond for a short, yet annoying amount of time.

The color palette is vibrant with neon colors but gets pulled down by the dreary world of copy and pasted buildings and the mediocre graphics. At times the game looks gorgeous, while other times objects look muddy and not appropriately textured. While the visuals are a letdown, the animations are far worse. Lip syncing and facial animations are painful to look at, especially since so many interactions are so close to people’s faces.

Technical problems weigh the experience down even further. Persistent stuttering comes in and out throughout my entire time playing. Objects popping in too late happened a handful of times. The biggest occurrence was a constant glitch of characters speaking, but no dialog could be heard. If you decide to pick this title up, turn on subtitles. Other times the audio would just come in late when I was lucky.

The idea of Rage 2 sounds amazing with id Software and Avalanche’s portfolios being so reputable, yet none of the brilliant ideas were exercised enough to make this the colorful, charismatic shooter that it had claimed. By the first game’s unenthusiastic reception, that should have been a warning sign for everyone that this sequel would not be worthy either.

Want to try Rage 2 out? Buy it and support the blog through the links below:

Buy and support the blog: Rage 2 – Xbox One