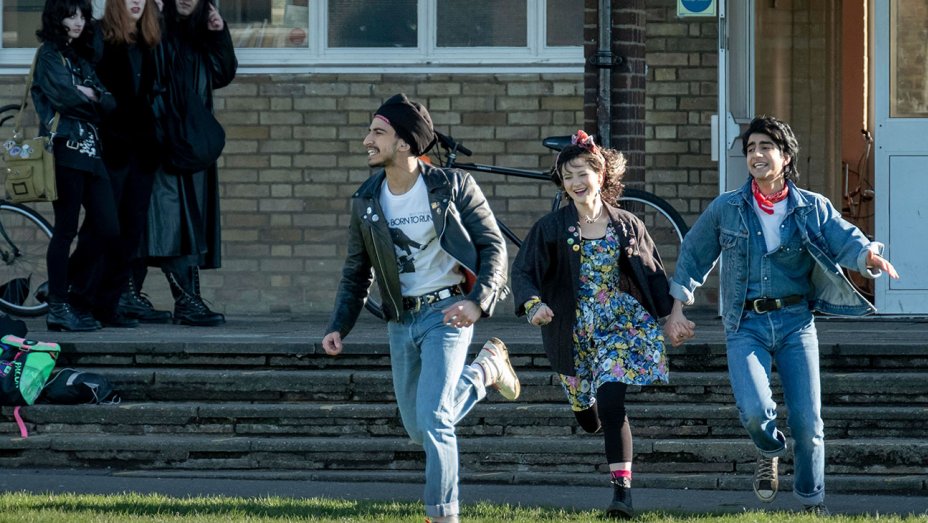 The trend of movies based on classic rock artists continues, but suddenly it diverts in a different direction away from biopics on rockstars with something with more substance for a general audience. Blinded by the Light tells a true story, based on Greetings from Bury Park by Sarfraz Manzoor who also co-wrote this adaption, about hardcore Bruce Springsteen fan and goes beyond that story. This touching film can go for any fan of the musician or anyone wanting to get emotional in a theater, either way, it is a delightful ride.

Javed (Viveik Kalra) is living in tough times with his traditional Pakistani family in a small town in Britain. He feels lost and put down, someone without a voice. His newfound friend Roops (Aaron Phagura) gives him that inspiration for his individuality and passion for writing by introducing him to Bruce Springsteen. The drama-filled life of Javed’s is impactful and becomes way too real; I got put into a weird headspace by how much I could relate to him.

His relationships with Roops, best friend from childhood Matt (Dean-Charles Chapman), and his strict family drives everything. It is wholesome to see his connection with Roops, while the tension in his home brought me closer to him. The real meat of the narrative comes from his strict father, Malik (Kulvinder Ghir), who wants his son on a path that goes with his values.

Where there is negativity in the protagonist’s life, there is positivity. His English teacher who pushed his writing forward, Ms. Clay (Hayley Atwell), was wonderful in every scene. I wish she had more screentime and depth added to the character rather than someone to move the story. Then there is the love interest storyline with Eliza (Nell Williams) who is both interesting and a voice that gives extra contrast to the rest of the cast of compelling personalities.

Everyone’s performance was outstanding, making it even between stars, so nobody took the spotlight. Kalra expressed so much emotion from yelling matches with his father to silently taking in tunes from his big American idol. His costars matched his level of intensity as each member had believable chemistry that brought these relationships to life.

Springsteen’s music gets scattered evenly throughout. The musical scenes get quite inconsistent with each step taken. The stylistic lyrics coming to life to emphasize what the songs mean to Javed make moments more moving. Other times, when people are frolicking in the streets to the legendary artist’s music, it becomes overly cheesy and quite cringy.

An hour and 54 minutes are not too shabby of a runtime, yet it feels too long. Tightening the story would make the enjoyment and wholesomeness of the message much better. Since too many beats in the story get hammered too hard, it starts to become redundant with what is happening in Javed’s life.

The message of music bringing people together and helping them through their troubles speaks the truth. While Springsteen is not my choice, I do know precisely how Javed felt when he listens to the New Jersey-born rocker. The notes about being your own person, especially in a world that beats you down are empowering without becoming too preachy.

Blinded by the Light moved me far more than I thought it had the strength to do. Director and co-writer Gurinder Chadha along with her other writers Paul Mayeda Berges and Sarfraz Manzoor balance the story and commentary on politics to more intimate subjects about family and identity. As I am not a fan of that era of rock, I can surely recommend this heartwarming flick.