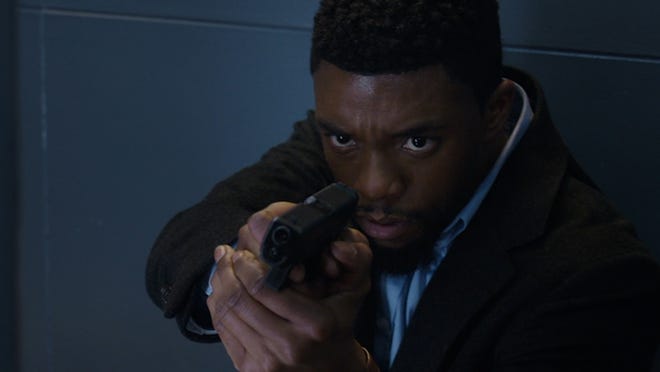 Sometimes the trailer is better than the movie, that is the case here. 21 Bridges is a solid experience as a stay at home movie with a few friends to enjoy something entertaining and fairly exciting. No real substance, failures left and right, but an easy ride that goes quickly.

Ray (Taylor Kitsch) and Michael (Stephen James) rob a place hoping to get 30 kilos of cocaine; instead, they find 300 kilos (dun dun duuunnn) and must kill everyone on sight, mostly police officers. So, it is Andre Davis (Chadwick Boseman), a cop who is known for killing cop killers, to find these men and uncover the mystery of the additional loads of drugs, which he does by locking down Manhattan’s 21 bridges. This is as typical as you get with the twists, turns, and shootouts with some bland characters.

Boseman does a great job for a character who is thin but has a more in-depth background than anyone else. Ray and Michael get a brief, generic overview of their lives that does not make them sympathetic or even great villains. Other officers like Captain McKenna (J.K. Simmons) and Frankie Burns (Sienna Miller) who are equally thin, but at least have performances that make it worthwhile.

Speaking of Simmons, one of the best actors in history. He is wasted completely. Same with a lot of the cast, but as the most prominent name here, I felt that anyone could have played that character. His little screen time is utilized to the best of his abilities, but I feel he needed more substance.

The entirety of Andre as a character was based on information in the few minutes about his dad’s death and an investigation on how many crooks he has killed in 10 years. While this lead to his motivations, plenty went under the radar to make this fictional person feel real or give me an ounce of empathy towards him.

A movie about seven police officers getting gunned down has some weight it carries on its shoulders. The violence, the grim shots of the crime scene, and the acting of everyone arriving at the massacre got me in the feels. The only issue comes from the faceless people serving the city of New York who got slaughtered as I just witnessed generic people in uniforms get killed without any real development of a single person involved, the killers included.

The story pushes forward for the sake of gunshots and drama. When it is hitting a stride, I felt compelled by what was happening, other times it felt melodramatic. Seriously, police on police or police vs. FBI is overly done in everything, nobody needs to see how it plays out in the same way it does on TV.

At times, things just start happening without much explanation. The police get information at times that do not make sense, while other times, it decides to let the audience know how things are moving along.

An even split comes as I got to see Officer Black Panther hunt down the men who killed his fellow men and women in blue and seeing the criminals attempt to flee out of the city. One cause of tension is to chase down murders while the other is both an escape and to solve who set them up to gather that extra cocaine with the mysterious arrival of the police, something must be going on here. Well, yeah, and it got shoved down my throat in the last few minutes to wrap up the story. It is an hour and 39-minute movie, it could have added some time on the clock to flesh things out more.

The action is entertaining because it is hard to go wrong with plenty of blood and lots of gunfire. No real choreography is done, unlike others in the genre. It is more about running, shooting, and nothing all that memorable except for how dark everything is. Why do so many American action movies keep everything in the dark with people wearing dark clothing? Get it together.

The many complications to filmmaking make this impossible to solve as to how this went so poorly. Instead of an exhilarating thriller, 21 Bridges is an enjoyable flick to turn on and turn your brain off. Director Brian Kirk did well despite mostly experience on the small screen with Game of Thrones and Dexter, meanwhile writers Mather Michael Carnahan from the terrible World War Z and Adam Mervis from The Philly Kid (what?) laid out bland characters and a narrative that should have been done more justice to give me some empathy as I watched things unfold. Maybe a more experienced staff of writers and some magic from some unsung hero on the crew could have saved this movie.