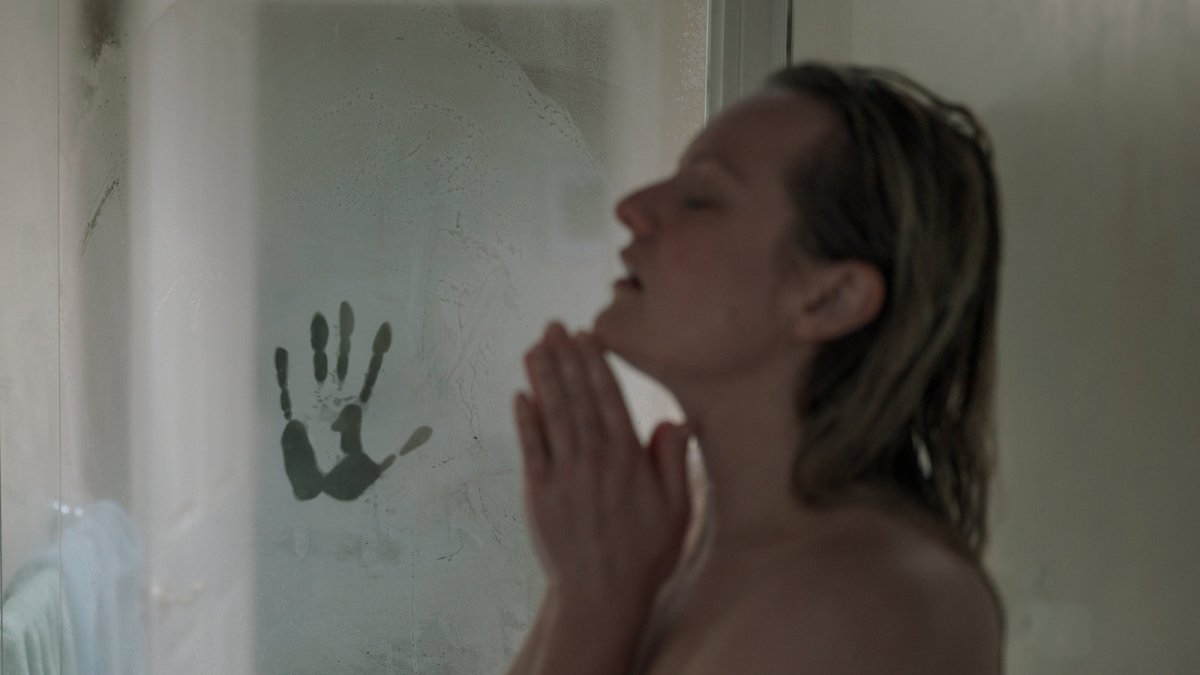 Remaking horror classics is a hit or a miss, and often the latter. The Invisible Man takes a twist similar to Hollow Man, except this is actually good. It has familiar strides as other films in the modern era of the genre but executes those aspects in ways that only a master can do, so bravo to director/writer Leigh Whannell along with his cast and crew.

After living with her abusive boyfriend Adrian (Oliver Jackson-Cohen) in his fancy fortress on the water that I desperately want for myself, Cecilia (Elisabeth Moss) escapes. Two weeks later, the news arrives that he died by apparent suicide, but things seem funky. Once she finds out, the survivor must figure out how her evil ex became invisible. It sounds absurd on paper and tiptoes into that realm, but this thriller full of spine-chilling breaths and a look at the terrifying truth about abuse packs a punch.

The plot does have its hiccups of convolution, while still keeping its footing without falling on its ass. What holds everything together comes from the core cast. The relationship Cecilia has with her friend James (Aldis Hodge), his daughter Sydney (Storm Reid), and her sister Emily (Harriet Dryer) feels as real as her connection to that invisible monster. Everyone is on their A-game, and it goes above those stellar levels when they work together on screen.

I do think everyone did an outstanding job, but Moss demolishes every scene, outshining anyone who shares a second of screentime with her. Her portrayal of experiencing that level of psychological and physical trauma radiates to making me choke up throughout these two hours of horror. Her paranoia and pain became mine, which the pacing accompanied by the writing and directing of Whannell compliments kindly.

Cohen had little to do as he, or the stuntman, were invisible and trying not to give away this twisted attack on Cecilia. The little time he did have, he laid out the personality that I have seen before of these assholes who think they are on top of the world and can outsmart everyone. Great job on nailing the douchey performance to counter the lead’s lure to take her side.

What often kills the boogeymen hiding under the bed, or a smug genius wanting to torment a poor woman, comes from the pacing. I see it too many times where the story gets overly convoluted, or the climax falls apart. Whannell holds it together despite some wobbly moments that quickly get made up. The tension is held with spikes of action for an experience that kept me on the edge of my seat, unaware of what’s to come.

Having an invisible antagonist opens up many possibilities to torture characters and the audience or will leave the filmmakers falling over themselves, trying to scare people. The subtle use of Adrian’s manipulation of the world around kept me scanning the background and second-guessing my own sanity. It builds up anxiety while creating extra empathy towards Cecilia that is not even needed, as I already wanted to reach through the screen to protect her within seconds.

The sound design and editing are masterfully done. The department delivers uniquely interesting sound cues to heighten my senses for a scene. On the flip side, the use of deafening the volume would quickly change the atmosphere for me while everything seemed dandy for Cecilia.

Stefan Duscio is a monster with the cinematography by playing constant tricks. Panning the camera, one way to make me think where the invisible mad man was in the room to mess with Cecilia. Sometimes that nothingness was true, creating me insane like the heroine herself.

The score composed by Benjamin Wallfisch matches the amount of anxiety I was feeling. Ominous booms and shrill strings elevate every ounce of emotion I felt, from the pain to the heart-pounding intensity.

Using optic technology was a great way to modernize the film. Though the technology was hard to buy, I decided to roll my eyes and go with it as the film did too with its lack of explanation. Just have fun and ignore dumb fake science.

Whannell’s remake of The Invisible Man follows a similar formula as many but excels in nearly every element. It has its jump scares, but those are thrown in strategically and sparingly. The psychological warfare with the adrenaline-pumping action to beef up the unnerving tension makes for tough competition for any other horror remakes to outmatch this beast.